I haven’t had much time for painting of late – primarily because I have been building and preparing yet more models! In the meantime I have progressed the Fellowship as well as Tom Bombadil and Goldberry. And The One Ring which I will be using as a Priority marker. These are currently at Back Rank level, awaiting my brush to progress them.

Goldberry’s dress is a solid layer of Rakarth Flesh (was: Dheneb Stone) and, once dry, a wash of watered down Scaly Green (older colour set) was applied. I’ll build this back up to white, but am happy with the result thus far.

The above models would have been complete by now, but some friends and I are planning to combine our armies for an Orks vs. Crimson Fists game which should be around 12,000 points on the table (6k per side). We’ll be using 40k 6th edition, rather than Apocalypse because we don’t need the time shortcuts that Apocalypse gives us, plus we’d want more Apocalypse units on the table.

The Orks are for a friend’s horde and the Marines will be added to my Crimson Fists. It’s either them or I paint a third Tactical Squad and, frankly, I love the camo cloaks on these models. That and it fits with the background, right?

The Ork models are superb. They pretty much clicked together with a dab of superglue, but as with any non-plastic model I did pin them too. The scouts were similarly easy to build with the only conversion being the addition of a scope to the sergeant’s snier rifle.

Hopefully that’ll go some way explain the following ‘speedbump’ to my painting: 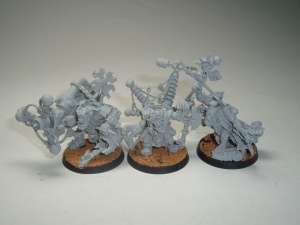 This entry was posted in Uncategorized and tagged 40k, aragorn, boromir, crimson fists, gandalf the grey, gimli, goldberry, legolas, lord of the rings, scouts, the one ring, tom bombadil. Bookmark the permalink.