So what happened? Another 1k game of Warhammer Fantasy and multiple games of The Lord of the Rings as we ran into Scenario 4: Buckleberry Ferry. Painting-wise I completed my Necromancer and polished off another 30 zombies. Photos would be nice, so i’ll see what I can do in a couple of days time. (In a blog world I suppose I could say: look above this post…)

Warhammer up first again and this time I was playing Alan’s Ogres. After giving me a bit of a start with the models he had arrayed on the table, he removed some to take it down to 1,000 points. Phew. I was pretty much crushed despite keeping the 4 Leadbelchers and 2 Mournfangs out the battle using only 5 Wolves and 3 Wraiths. My points advantage in the centre was burned by bad placement of the counter-charging cavalry (missing a sweet flank by about 2mm) and my speed-bump zombie horde not being far enough in front of my two skeleton blocks. Lessons?

Onwards to Scenario 4: Buckleberry Ferry and we managed to play through this four times last night. The first play-throughs were Stuart and I, then Nick and I; Jason and Tim were at their respective work and Tom had a couple of pre-arranged games of Warmachine.

Stuart thought laterally and sent Frodo into the corner, aiming to swim the Brandywine. It was pretty inspired until I was able to shake the Sentry rule, get a brace of Ringwraiths over to the corner and… well, we decided that a Transfixed swimmer would sink like a brick: The Ring returned to the fish’s belly! Game 2 saw the first of the Narrative vs. Gamer approach to the scenario. Let me give you an example:

Narrative Approach: “Master Frodo, we must race to the Ferry: it’s our only hope for safety.”
Gamer Approach: “Wait Sam, there are four of us and only one of them in range. Take him to the kerb, boys!”

Photos: (1) Merry is used as a Will-sink, engaging the rearmost Nazgul and allowing Sam, Frodo and Pippin to race to the trees – and the Ferry. (2) now through the trees, Frodo has a quick scare when a Ringwraith steps from behind the rocks and attacks. 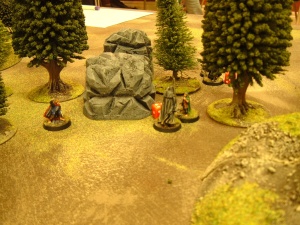 (3) However, a lone Ringwraith stands little chance against swarming Hobbits. Will was leaking quickly and he was quickly banished. Frodo and his friends spent a nice afternoon sitting by the river, toasting their gaming skills.

Massive appreciation to Nick who has managed to get Pippin killed in both Scenario 3 and Scenario 4, yet recover his Wound and Fate points in the post-game recovery. Good times for a Hobbit who evidently does all his own stunts.

Final result was Good 3 – 1 Evil and the Ringwraiths work well on foot.