DAK: Painted, Based, and … Oh-so-almost-there

As discussed on Home Guard Radio, my 750 point list hasn’t changed since I swapped out the Medium Mortar Team for the Anti-tank Rifle Team. That was three months ago and so the list has been getting a fair try out since then, with a fair share of victories – some more worthy than others. It’s quite a defensive set-up with a counter-strike ability which makes certain scenarios a little tougher for me when I have to play aggressively, such as Envelopment or Demolition. At the moment they look a bit small, but I will be adding an LMG Team to each squad for my 1,000 point list, so I will end up with 9 men per squad which is pretty beefy. 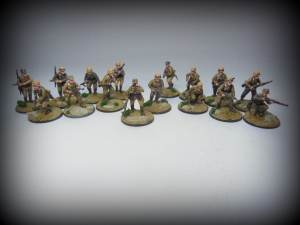 The basic Reinforced Platoon of Lieutenant and two Infantry Squads are complete, the centrepiece of the army – the PIII Ausf G – has the basic colours shaded and highlights applied, but is awaiting minor weathering and of course the all-important iconography! I have several sheets of transfers on order, but the turret has so much detail I reckon I’ll have to do the numbers by hand. Oh well, I’ll sharpen the brushes!

These remaining models are certainly ready to grace the battlefield, but I know that there is still some work to do on them. Some of them need hair and the black needs highlighted. Oh, they also need some rank insignia, but I’m researching that at the moment, so it shouldn’t be long before that happens. I very much recommend Painting War issue 1, by WxW, in this regard as it’s full of tips for painting many elements of the German Infantry of World War II, including the ranks and insignia.